The Flight of the Lawnchair Man 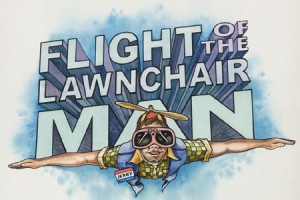 FLIGHT OF THE LAWNCHAIR MAN tells the story of Jerry Gorman, a man from Passaic, New Jersey, who dreams of flying – despite being clinically dyslexic and none-too-bright. His girlfriend Gracie gives him the courage to follow his dreams and fulfill his “Jerriosity.” When every other avenue fails him, Jerry has a brainstorm. He ties 400 helium-filled balloons to a Wal-Mart lawnchair and takes off into the sky. While Gracie fends off a zealous FAA Agent on the ground, Jerry floats blissfully over New Jersey ever higher in the stratosphere. There he encounters Leonardo Da Vinci, Amelia Earhart, and Charles Lindbergh, who encourage him to keep flying and never to land. Jerry must ultimately decide whether to return to Gracie on the ground or keep flying and join the greats of aviation in the sky.

“Hey, they do write ‘em like they used to! FLIGHT OF THE LAWNCHAIR MAN sends the audience out in its own lighthearted reverie with the giddiness of helium. Tuneful and varied songs by Robert Lindsey-Nassif. A simple ballad called “The Air Is Free,” the sentiment the show trumpets — dreams are available — is pungent enough to make you cry. Achieves the palpably energizing force of a transfusion. Irresistible! On the evidence here, it seems certain we’ll be hearing much more from the creators.” The New York Times

“The show…lifts off and soars. Manages to charm, uplift and inspire great hope for the future of the American musical. The show delivers one show-stopping bit after another. LAWNCHAIR MAN has all its cylinders, or propellers, or balloons, working in unison, and it’s a joyful, wacky accomplishment.” Variety

“THE FLIGHT OF THE LAWNCHAIR MAN [is] wildly imaginative and consistently hilarious. The musical, directed with brilliance by the peerless Harold Prince, soars on literal and metaphorical wings from the moment it begins.” The Press-Enterprise

“FLIGHT OF THE LAWNCHAIR MAN, [is a] marvel of a musical! The audience’s high when it leaves the theater puts them right up there in the stratosphere. This wonderfully sappy, funny and finally touching pocket-size musical is filled with invention and charm.” The Hollywood Reporter

Cast Album CD
(One Act version from the musical 3HREE):