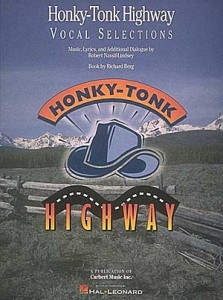 HONKY-TONK HIGHWAY is a tribute to the legendary country-western singer and songwriter, the late Clint Colby. The time is 1970. We are at Tucker’s Road House in Tennessee, where Clint’s rocket-ride-of-a-career began twelve years ago. Clint’s former band, the Mountain Rangers, has reunited tonight for a one-time-only concert. Though Clint died a year ago this very night, he is represented by his trademark baby blue cowboy hat. Whichever band member dons the hat “becomes” Clint as we flashback to tell the story of his rise and fall through the autobiographical songs he wrote and made world famous.

One of the most thoroughly enjoyable evenings in town! The songs by Robert Lindsey-Nassif are remarkable. Run, don’t walk!” Backstage, New York