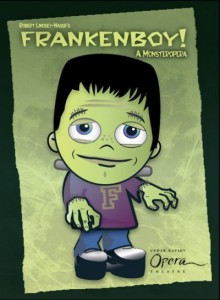 FRANKENBOY! tells the story of a 13-year-old Frankenstein monster named Melvin, who is experiencing his first days at Transylvania Middle School. He finds he doesn’t fit in anywhere and soon becomes the target of bullying, led by the school’s hockey team hero.

The opera is aimed at third through sixth graders and deals dramatically and humorously with the issue of bullying. Nassif, who also directs the opera, said, “As a voice teacher, I work with students age 8 through adulthood and fully know that, in this age of texting and Facebook, students are more vulnerable than ever to being harassed and bullied. I know the importance of teaching students how to recognize and resist bullying and how to stop it when they see it and to embrace their unique voice.”